Are you considering doing the Dr. Oz 3 Day Detox Cleanse? Well, I took it on! Here’s my 1st-hand experience and review! 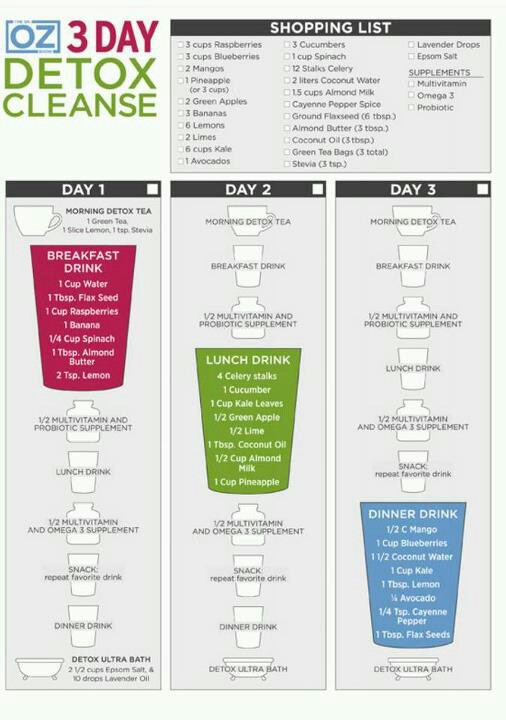 The Ever-Popular Cleanse for A Kick-Start Detox

It’s no secret that at the start of the year, we’re all looking to reset some of our health goals: start exercising, kick the sugar addiction – in general – just be healthier. Cleanses are a great way to make a sharp break with those bad habits and clean out your body in the process.

These cleanses can be anything from the Master Cleanse to Whole30 to the Daniel Fast to a Clean Eating Challenge to a Smoothie Detox, like Dr. Oz. suggests.

These cleanses can range from 3 days (Dr. Oz) to 1 week to 10 days (Master Cleanse) to 3 weeks to a whole 30 days (Whole30). The one thing in common with all of them is that you are getting rid of sugar and artificial ingredients and either eating or drinking real food. Some have more exclusions than others but the goal of all of them is to get rid of all the impurities that we’ve taken in and reset our system.

My Experience with the Dr. Oz Detox Cleanse

After my Master-Cleanse scare, in line with keeping my Get Healthy Challenge goals, I decided to do the Dr. Oz 3-Day Detox Cleanse.

Comparing the two, Dr. Oz was definitely easier than the Master Cleanse. Lemonade with maple syrup and cayenne for 10 days (well, 5 days for me) vs. smoothies for 3 days?

Yeah, that’s a no brainer.

That being said, Dr. Oz wasn’t as easy as I thought.  First, it was a lot of work…a lot of prep work of cutting fruits and vegetables; a lot of food shopping for the right ingredients; a lot of lugging mixers and blenders to work with me so I could make the smoothies.

Second, I didn’t love the smoothies. They did grow on me after I read up on a few tips to make them better, but it wasn’t exactly like having dessert for 3 meals a day.

Third, even though I wasn’t really hungry, it was still hard not to eat.

[Sidenote- sometimes I wonder about this. Why is it so hard not to eat? Why are we all so obsessed with food? I mean, it’s food. It’s just stuff we put into our bodies to stay alive. Sure, it’s delicious, but it’s food. Why is this on our minds 24/7?]

All the same, I missed all the wonderful tastes I was deprived of (First world problems, right?)

So, here’s the rundown on how it went.

I started off with the green tea, which, surprisingly, I enjoyed. The breakfast shake tasted pretty good, although I could taste the spinach more than I liked. It definitely was filling, though. I started to get a little hungry mid-morning, but I just sucked it up. Too much of a project to try to make this concoction during an early, rushed, free period.

The lunch shake, in all honesty, almost made me gag. First, it made waaaaay too much – four cups. 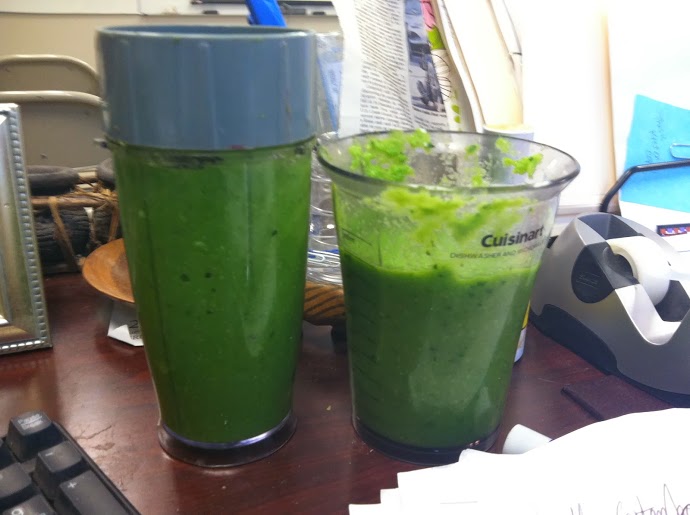 That is a A LOT of green smoothie. FOUR cups! Ugh.

To me, the cucumbers were overwhelming, and for some reason, I just didn’t like how it tasted with the coconut.  I literally had to hold my nose and chug to get it down.  It took me a couple of hours to do. So, after lunch, I was definitely feeling defeated and not sure if I could finish this cleanse.

But not wanting to fail, in public (i.e. the Blogosphere), I persevered.  The lunch shake took so long to drink that I didn’t have time to make a snack shake before dinner – and I was still too full from lunch, so I skipped it.

The dinner shake tasted good, although the cayenne was a little noticeable.

I didn’t notice any side effect – a little bit of a headache, but nothing severe.

I took the vitamins all at once instead of mixed through the day (I was already taking prenatal multivitamins, so I used that. I skipped the Omega 3 – didn’t feel like buying a bottle of vitamins I probably wouldn’t take afterwards. I did buy a bottle of acidophiles to take as a probiotic. Probiotics are really expensive, I discovered! ).

I did the Epsom salt bath that night as well. Some reviews I read said they LOVED it, but for me, I didn’t really notice anything one way or another.

After reading a few reviews, I changed things up a little. First, I decided to freeze the fruit, and that made a huge difference!  The breakfast shake was definitely yummy. Didn’t taste the spinach this time at all.

For the lunch shake, I knew I needed to change it up. I decided to eat 1/2 the cucumber and 2 stalks of celery before lunch instead of putting it in the shake. I needed to decrease the volume, make it more palatable, and having a snack would tide me over until I could make the shake.

I also cut a lot more of the ingredients at home ahead of time, so it was much easier putting it together.  It took a little juggling, since my Magic Bullet wasn’t big enough for all the ingredients, and I had to use a hand blender, too.

I also realized I forgot the coconut oil at home (which I found out later that I really didn’t – it was just in a different bag).  Eating some celery and the cucumber ahead of time definitely helped with the volume and cut down on the overwhelming cucumber taste.

Again, I didn’t have a snack shake – the times just didn’t work and I really didn’t feel like the hassle of putting it all together. I bought just the right amount of ingredients, and if I made the snack shakes, I would have to go to the store again (and I was SO tired of running around to find the cheapest ingredients!)

The dinner shake was much better with frozen fruit. Barely tasted the cayenne. I realized after the fact that I forgot the flaxseed, so I decided to just add more for breakfast.

As far as how I felt, I definitely was very tired and very sniffly. Not sure if it was related to the cleanse, but I was worn out. I skipped the bath because I was so tired and just wanted to go to bed.

Nothing of note to report for breakfast. I did double the flaxseed from the day before.  I did the same thing for lunch on as Day 2.  This time, I didn’t forget the coconut oil – and I didn’t like it as much. I am a huge coconut fan, but for some reason, mixed with the cucumber, it made me want to gag.

Still, I was able to get it down pretty easily – but I drank it quickly.  I skipped the snack shake again – for the same reason as the day before. I forgot to take the vitamins during the day, so I just took them when I got home.

During the day, I felt very tired. VERY tired.  Once I had the shake, I felt good, but I was pretty sluggish in between.

No bath on Day 3, either. Again, I just wanted to go to sleep.

All in all, between both cleanses, I am down 5.1 lbs., and inch on my hips and an inch on my waist.  This isn’t a huge weight loss, but my clothes are starting to fit normally again.

More of the same:

[Has anyone else tried this cleanse? Planning to try it? Done another cleanse you have liked? I would love to hear about it!]

This site uses Akismet to reduce spam. Learn how your comment data is processed.

Welcome to A Hundred Affections!

Hi, I'm Kate - a long-time Christian, late bloomer, former high school English teacher, current SAHM to twin toddlers (our miracle rainbow babies)! If you're a busy mom, trying to do and be the best for the people in your life, you've come to the right place! My goal is to inspire moms running the show at home in balancing faith, family, home and health! If you need encouragement, ideas, practical information, or just a kindred spirit, you'll find it here.

Well, Twin #1 bounced back from his fever, but in

I’ve been wanting to make a book paper wreath fo

Ugh. This kid. Cannot catch a break. He’s been l

One of the reasons I don’t really do New Year’

I want to encourage the moms out there, especially

Raining here in Tennessee today… still have one

So no church for us today… we have one still fig

Do you have a favorite Bible verse? It’s hard to

So I’m in a few Facebook groups for @dollartree

Any other Sound of Music lovers? “My Favorite Th

Most of the country is sending kids back to school

Today is the day I’m officially putting away all

Happy 2020, everyone! Hope you had a great time we

Yesterday, I was taking down Christmas decorations

What you're looking at is my son laying on the flo

It’s funny - when you do work that’s seasonal

#sponsored I usually do some kind of clean eating

We don't have many Christmas traditions (yet), but

Kate Landry | A Hundred Affections is a participant in the Amazon Services LLC Associates Program, an affiliate advertising program designed to provide a means for sites to earn advertising fees by advertising and linking to amazon.com

3shares
We use cookies to ensure that we give you the best experience on our website. If you continue to use this site we will assume that you are happy with it.Ok